Integration to the MOH NHI database requires entry of a username and password, generated by the MOH, into the Dispensary program.

If a NEW username and/or password is required the MOH’s helpdesk should be contacted.

If an existing username and/or password is required at a later stage, both the Toniq and MOH helpdesk will have access to it.

Once you have your credentials from MOH (usually sent via email), go to 7 – Administration, 1 – Setup, 7 – Internet Options.

In Edit Patient use the F3 NHI/PSC Lookup function key to launch the lookup.

A search can be done either by NHI if you are wanting to validate address and name details.

OR it can be done by name in order to check/find the NHI number itself.

These are options 1 or 2 in the option list displayed when the function key is pressed. 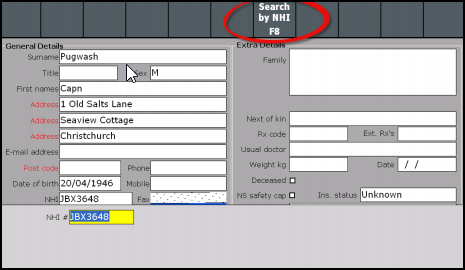 Check the details against what you have entered.

In this case the full name, date of birth, gender and address returned should be checked for the patient to be sure that this NHI number is properly assigned to this patient. Function keys at the top of the screen can be used to update the pharmacy record if the pharmacy recognizes that the returned data from NHI is more accurate or current.

As per the below example, Capn Pugwash probably should be Capn Mark Pugwash, and the first two lines of his address should perhaps be in the reverse order. 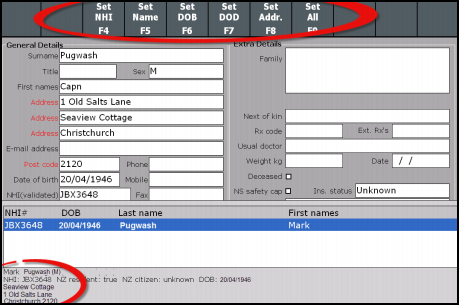 A variety of function key update options are presented once the patient is matched.

Once you have confirmed the identity and ensured all details are correct, remember to press F4 – Set NHI

What is NHI Validation?

A validated NHI is one that has been checked against the MOH database and one of the update function keys has been pressed to confirm the patient was found.

Multiple NHI's for a Single Patient

Some patients will have been issued more than one NHI number over the years. These NHI numbers are linked in the MOH database and any of the numbers can be used to locate a patient's details – these are called dormant NHI's.

An NHI lookup done for a dormant NHI should return the expected patient but the returned result will show the live NHI rather than the dormant one used to do the lookup.

Under these circumstances consider using the F4 Set NHI function key to update the patient record with the live NHI. However, if this is a regular patient, and the prescriptions coming from the doctor have the dormant NHI on them, this may not be practical operationally. Your decision may depend on your working relationship with your doctors! If you do update the NHI it may be worthwhile recording the dormant NHI in a patient note, and vice versa if you keep the dormant NHI it may be worthwhile recording the master NHI so that one day when the prescriber has updated his/her records you can follow suit.

Electronic claim error checks will highlight missing or invalid claim items. The Fix key can be used to correct or add NHI’s to the patient.

Accepted claims (i.e. those with reply files loaded) will display a new error message for rejections due to missing or invalid NHI’s.